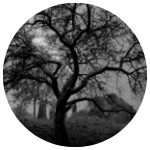 The shoe tree story is urban legend at its finest because there’s nothing haunted about some old shoes in a tree. Sure, some of them look creepy, but are shoes tossed in the branches of a tree paranormal? No way. But try telling that to someone who claims that their car wouldn’t start when near a shoe tree and other bizarre occurrences that are said to happen by these roadside oddities.

I was heading up north with a co-worker for a dreaded week-long public library workshop in Petoskey way back in 2002 when I spotted my first shoe tree. I was genuinely startled by it as we zipped past the monstrosity to the left of us on US 131 north.

I turned around in my seat and watched the tree shrink away as we drove on. I distinctly remember saying, “What the hell was that?” to my co-worker. “Were those shoes hanging from that tree?” She just shrugged and said she’d seen it before while driving up north and it was indeed a tree literally covered in shoes.

The boring lectures on library cataloging and other equally boring topics didn’t leave me entirely brain dead. I still remembered the strange tree I had seen and looked it up as soon as I got home and discovered the “legend of the shoe trees.”

There are a few story variations floating around, but my favorite and most talked about one says that back in the day around Walled Lake, (the early 1900s), a sick and cruel man began murdering kids. After he disposed of the bodies, he threw their tiny shoes up into the branches of a tree. Eventually, the man was caught and people found his tree, ornamented with the dangling shoes of dead children. Supposedly, this legend sprang forth from a pair of antique children’s shoes found in a tree in the area. At some point, the story became entangled with that of the “Walled Lake Child Killer,” a murderous villain who also never existed. What did exist though was the Oakland County Child Killer. From 1976-1977, four children were abducted and murdered and the killer has never been found to this day. Perhaps people’s stories were starting to mix.

How the shoe tree stories got started and where they will be fifty years from now is part of the mystery and fun of legends. The trees continue to spark both fear and curiosity in people when they see them. 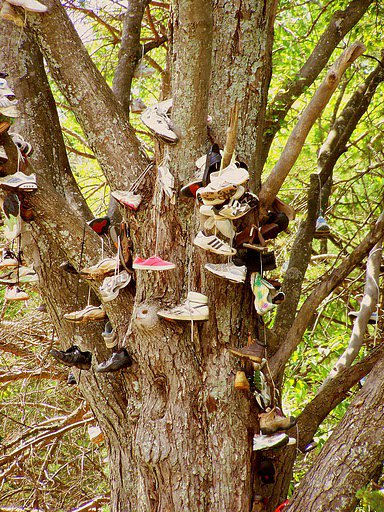 Shoe tree near Kalkaska on M131. Photo by Stacy Carroll.

This seems to be the gist of the urban legend and also its possible Internet origin. This was the original anonymous posting from the www.shadowlands.net website.

Walled Lake – Shoe Tree – The shoe tree was on Thirteen Mile Rd. in Novi a quarter mile from Walled Lake and on the site of the old Walled Lake amusement park. A child killer (the infamous Walled Lake Child Killer) kidnapped the children from the park and buried their bodies in the nearby field around the tree. He threw their shoes into the tree. When the many dangling shoes were investigated, the bodies were found (but the killer never was). If you went to the field at night, you could see and hear the clumps of tall grass moving around you, and you could hear the children cry for their mothers! Witnesses report distinctly, audible cries. The cries were not distant but from just a few feet away. As you walked to where the cries came from, they seemed to move around. Not moving farther away, just around. Sometimes back to where you were just standing. Just walking by the field would make your hair stand on end. The land was developed within the past couple of years.

A subdivision now stands on this land. But the field was on the south side of Thirteen Mile Rd., between Meadowbrook Rd. and Decker. The amusement park was later closed down. Not because of the murders but because it rested on an old Indian burial ground (many in the area). It was where Novi Rd., 13 Mile Rd., and Southlake Dr. all meet, right on the lake.

The Walled Lake Public Library made this statement many years ago on their website after getting numerous inquiries about this eerie tree and the story associated with it.

Stories about “shoe trees” abound throughout the land, and thanks to the Internet, one particular shoe-tree yarn has taken root in Walled Lake. Several people have come to the library seeking more information about the “Walled Lake child killer,” but thankfully, this “shoe tree” story is simply not true.  It perhaps was inspired by the still-unsolved murders of four children that took place in Oakland County over a 13-month period in 1976-77. In those cases, none of the children were from Walled Lake, and the bodies were found in Livonia, Franklin Village, Troy, and Southfield.

Here’s a list of shoe trees around the state. If you know of one that isn’t listed here or has been cut down, send an email, and better yet, send a picture too if you have one.

“When I was in high school (1990-94) we always heard of a shoe tree on 8 Mile Road west of Beck in Northville, so one Friday night, I drove in one car and a friend drove another with three passengers in each, to see if this was true. The story went like this:

There was a crazy man who lived in a house with a big yellow smiley face on the garage door. If you went past his house and the door was shut, he was killing someone in the garage. If the door was open he was looking for someone to kill. Then he threw the shoes up in the shoe tree which was on 8 Mile Road.

The road itself at the time was very narrow and dirt. The trees overhung and at night looked very scary. We went that Friday night looking first for the house and found no garage door with a smiley face, although some people’s doors were open. We continued on 8 Mile and came across the shoe tree. There were hundreds of shoes in the tree, which wilted severely over the road due to weight. We thought it was cool so we continued driving on the road. About a mile later we saw a garage door with a smiley face on it. I remember saying, “There it is!” and the girls in the back started screaming.

Just then, we saw huge spotlights turn on from behind the house of the driveway we were in and they started moving towards us. My friend in the car behind turned around fast, but I had to wait for him to drive away before I could turn around. I finally turned around and those bright lights were right on us. It was two big trucks with spotlights on top of the hood. My friend turned one way out the driveway and I turned the other. The two trucks both split as well so one was following each of us. I had a little Ford Escort and my friend had a Taurus SHO and he got away fast (although the truck chased him for about 15 miles.) The truck chasing us eventually caught up with us after going through a red light and cut us off. A large man got out of the car and came up to my window and tapped on it with his flashlight.

Man: What are you guys doing in our driveway?

Me: Nothing we were just lost and looking for a place to turn around and thought that was a road.

Man: (he looked at each person in the car) Don’t ever (expletive) come back there again!!!!

It was two hours later that we finally met up with the other car and both told our stories. We never went back there again. One girl actually told the story as a speech in a high school speech class and this story can be verified by people on Facebook. Now that area of 8 Mile is all built up with houses and a golf course. I know myself and the others in the car will never forget the shoe tree story.”