The Unsolved Mystery of the Robison Family Murders

The smell was overwhelming that July day in 1968 as Chauncey Bliss approached the cabin he had built years earlier near the community of Good Hart, on the Lower Peninsula’s northwest coast. Bliss was a carpenter who had constructed many vacation homes along the glistening shore of Lake Michigan. Now he served as the caretaker of those homes, which he had collectively named “Blisswood,” and which included among their number a residence occupied by the Robisons, a rich family from the Detroit suburb of Lathrup Village.

Drawn to the Robison home by a woman who lived near the family, and who called complaining about an ungodly smell, Bliss stepped up to the log-cabin-style residence. No one had seen the Robisons for several weeks, but family members had told acquaintances that they were planning a trip out of town, so their absences hadn’t alarmed anyone. The smell probably came from a dead raccoon in the crawl space, thought Bliss, steeling himself to face the odor that he knew would be more pungent inside. Bliss knocked at the front door but got no response, so he entered the house. Immediately, he saw a woman’s body sprawled in the entryway, her clothing in disarray. Behind her, Bliss caught a glimpse of several other bodies, lying on the floor in pools of congealed blood. Shocked, Bliss hurried away and called the police. 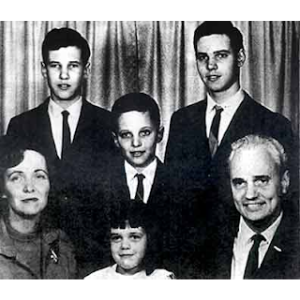 The Robison family. Top row left to right: Gary and Richie. Middle row: Randy. Bottom row left to right: Shirley, Susan, and Richard.
An initial investigation revealed that the cabin contained six bodies – every member of the Robison family, from 42-year-old father Richard to 7-year-old daughter Susan. Both father and daughter had been bludgeoned with a hammer, as well as shot with a pistol. The other family members – 40-year-old mother Shirley, and sons Richie, 19, Gary, 16, and Randy, 12 – had been shot with the same weapon as had the other Robisons, but had not been struck with the hammer. Due to the condition of the bodies, which were heavily decomposed and covered with flies, officers estimated the murders took place about a month before the Robisons were found.
Authorities eventually placed the date and time of death in the late afternoon or early evening of Tuesday, June 25, 1968. At first, police were at a loss. The Robisons were an upstanding family that attended church regularly and had no enemies. Richard was an advertising executive and published an arts magazine called “Impresario,” while Shirley took care of the family’s home. Richie, the eldest son, attended Eastern Michigan University. The younger Robisons did well in their studies, and family acquaintances said they were smart and polite children. Why, then, would someone kill the family in such a violent manner, then leave their bodies to decay for several weeks?

As police dug into Richard Robison’s business dealings, they came up with a lead. Though Robison presented himself as a prosperous executive, his companies were in trouble. He was engaging in funny business with the finances for “Impresario,” and was telling colleagues and family members about various deals he had in the works, though no one knew much about them. One of the most revealing discoveries was that, while he was in Good Hart, Robison had left his business in the hands of 30-year-old Joseph Scolaro III, an employee who was embezzling money from Robison. (The amount was later revealed to be about $60,000.) Police theorized that, during a phone call between Robison and Scolaro hours before the murder, Robison revealed that he had found out about the embezzlement. At that point, according to police, a panicked Scolaro took off from Detroit, drove several hours north to Good Hart, and killed the family before Richard Robison could come forward with details about Scolaro’s crime.

Circumstantial evidence supported this conclusion. Scolaro had been out of contact with friends, business associates, and family for twelve hours on the day of the murder, and police couldn’t find anyone to support Scolaro’s alibis as to where he was that day. Officers also discovered that shell casings found at a shooting range that Scolaro frequented matched casings police had found at the scene of the crime. In addition, Scolaro failed two polygraph tests and delivered inconclusive results on a third. To officers, Scolaro became a prime suspect.

However, because police couldn’t find the murder weapons, nor any eyewitnesses to the crime, the prosecutor in Emmet County, where the Robison’s cabin was located, didn’t press charges. Frustrated, state police officers worked with prosecutors in Oakland County, where the Robisons lived, to continue the investigation. In 1973, Oakland County Prosecutor L. Brooks Patterson was ready to charge Scolaro with conspiracy to commit murder. However, before officers could apprehend their suspect, Scolaro shot himself in the head, effectively ending Brooks’ attempt to prosecute him. Scolaro left behind a suicide note in which he said that he did not kill the family, but many students of the case, as well as the state police and the Emmet County Sheriff’s Department, still consider him the chief suspect.

That’s not to say that Scolaro is the only person who has been accused of killing Richard Robison and his family. Critics of the “Scolaro as killer” theory say that Scolaro couldn’t have driven to Good Hart, shot the Robison family, and driven back to the Detroit area in the amount of time for which he didn’t have an alibi. Some people suspect that John Norman Collins, who was convicted in 1970 of killing a female college student in Ypsilanti (and is a suspect in the killings of several other co-eds), was somehow involved in the Robison murders. Collins attended Eastern Michigan University at the same time Richie Robison did and is even said to have possibly roomed with Robison during orientation week.

Another proposed suspect is the caretaker, Chauncey Bliss, an eccentric whom some Good Hart locals believe committed the murders after his son, who was friends with the Robison boys, died in a motorcycle accident shortly before the Robison murders. According to this theory, Bliss felt slighted by Richard Robison in the days following the younger Bliss’s death and took his revenge by killing the family. (Police didn’t regard Bliss as a suspect in the Robison murders.)

Other suspects have been suggested and discarded, and the case is officially unsolved. Forty-five years after the murders, the community of Good Hart remains a popular vacation destination for “down staters” looking to get away from it all. Unfortunately, for the Robisons, their attempt to “get away from it all” ended during a violent encounter after which they would never return.

For more information on the Robison murders –

When Evil Came to Good Hart by Mardi Link (An excellent nonfiction book about the murders. I highly recommend it.)

Dead End by James J. Pecora  (Essentially a nonfiction book but changes the names of the family members and various characters)