When asylums were “all the rage,” in mental health, Traverse City was home to one of Michigan’s finest. It was first known as The Northern Michigan Asylum and built in 1885. The first superintendent was Dr. James Decker Munson who had a theory that “beauty” could be a form of therapy. Munson felt that if mentally troubled people could stay in a place surrounded by beauty, peace, and tranquility, that perhaps some of their troubles would cease to exist.

The use of a straitjacket was not even permitted. While “beauty” wasn’t always the solution for many problems that ailed people, it was in fact, a step in the right direction in regards to how many asylums and the people kept in them, were treated and ran. Throughout our world’s history, people with mental problems have been abandoned, locked up and horribly neglected due to a lack of knowledge concerning their condition. Dr. Munson felt differently about how these people were treated and it no doubt helped many people. 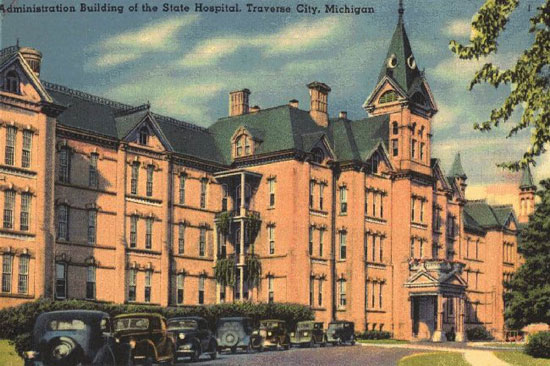 Vintage postcard from when it was still hip to send them.

The hospital operated for 104 years but after health care reforms in the state, the rise of new medications, and the declining use of such massive mental health facilities in general, the Traverse City State Hospital closed its doors for the last time in 1989. And like any old asylum from days past, the reputation of being “haunted” settled inside of its old bones as the buildings were left to deteriorate and fall into ruin — a perfect setting for ghost stories to be born in.

During the time the hospital sat in solitude and disrepair, one could look through the windows and glimpse mint green lead paint, peeling like blistered skin from the walls. Old medical objects and furniture were scattered through its long winding corridors and many rooms. The artwork on walls by former patients just made things even creepier. Throw in graffiti and modern vandalism for an extra creepy bonus.

In the early 2000s, a developer started to renovate and rejuvenate the beautiful buildings, turning the decaying asylum into gorgeous condos, offices, and even restaurants. The majority of restoration at the time was focused on what used to be known as Building 50. Building 50 was the hospital’s first and main building and was designed by architect Gordon W. Lloyd and followed the “Kirkbride Plan” for mental institutions. Dr. Thomas Story Kirkbride influenced how mental hospitals were to be built throughout the United States for decades with his book On the Construction, Organization and General Arrangements of Hospitals for the Insane, published in 1854. Building 50 is the last Kirkbride building left standing in Michigan, another important reason for the restoration project. 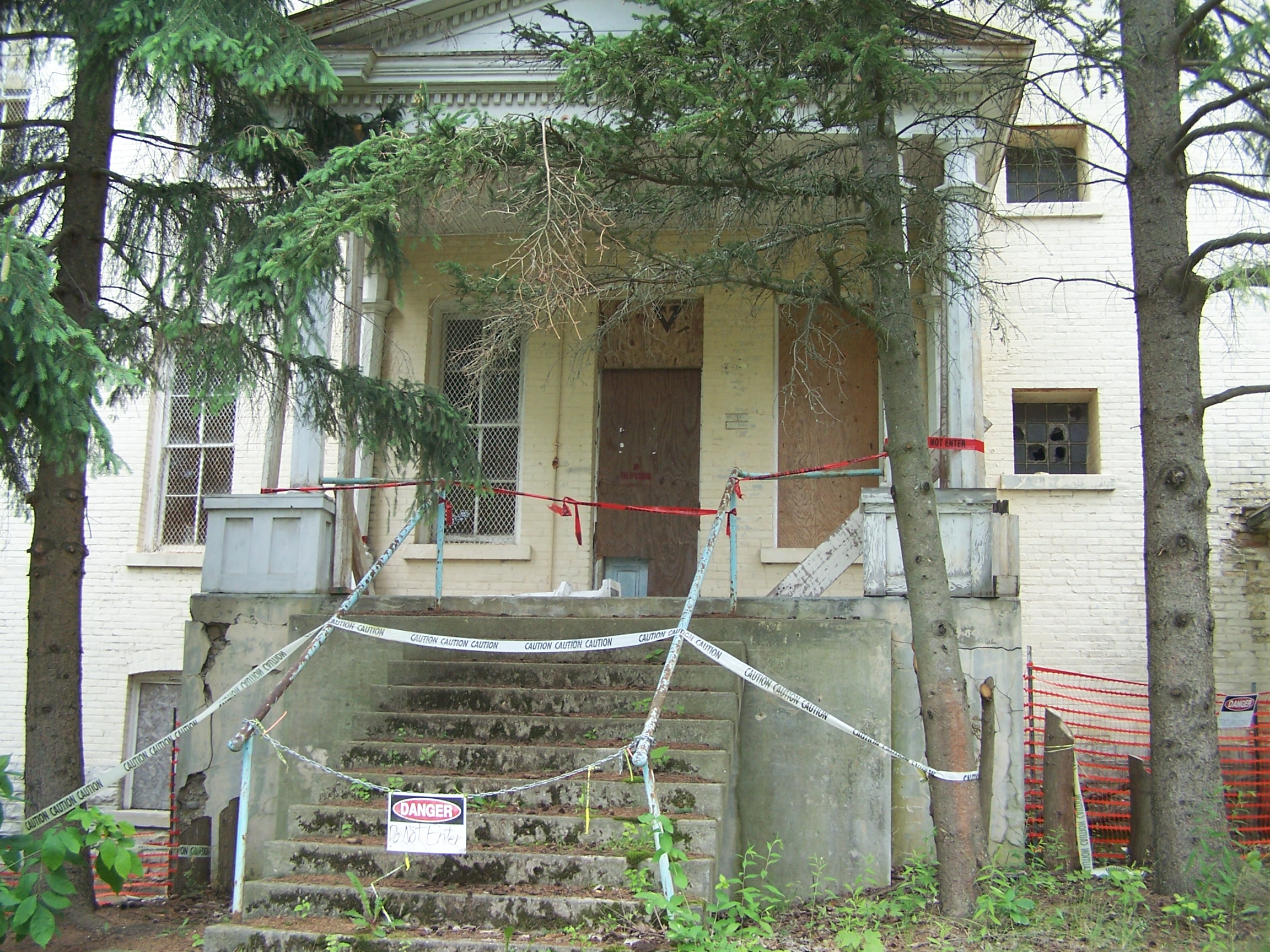 Waiting to get restored. Photo taken in 2005.

When we first started to explore the world of paranormal investigation in the early 00s, Traverse City State Hospital was one of the places to explore. The place just seemed to “ooze” ghosts and creepy things. On a trip in 2006 to the hospital, we explored some of the grounds away from the buildings and found the hospital’s old water tank back in the woods that had some seriously amazing graffiti artwork on it.  We walked up to the tank and my buddy Tom noticed a tree that made it easy to climb to the top of the tank. I was a little weirded out when Tom got onto the roof and seemingly started talking to the air around him. Was there already a friendly ghost up there lounging up there?

No ghosts, but there were three teens on top of the tank just hanging out. They lived in the area so we asked them about the local stories told about the hospital. I expected them to have tons of interesting and unusual stories being locals but they just nonchalantly said the place was known to be “haunted” and that it was “creepy.” They mentioned the area of the woods we were in gave people a strange feeling. So much for cool, local stories. 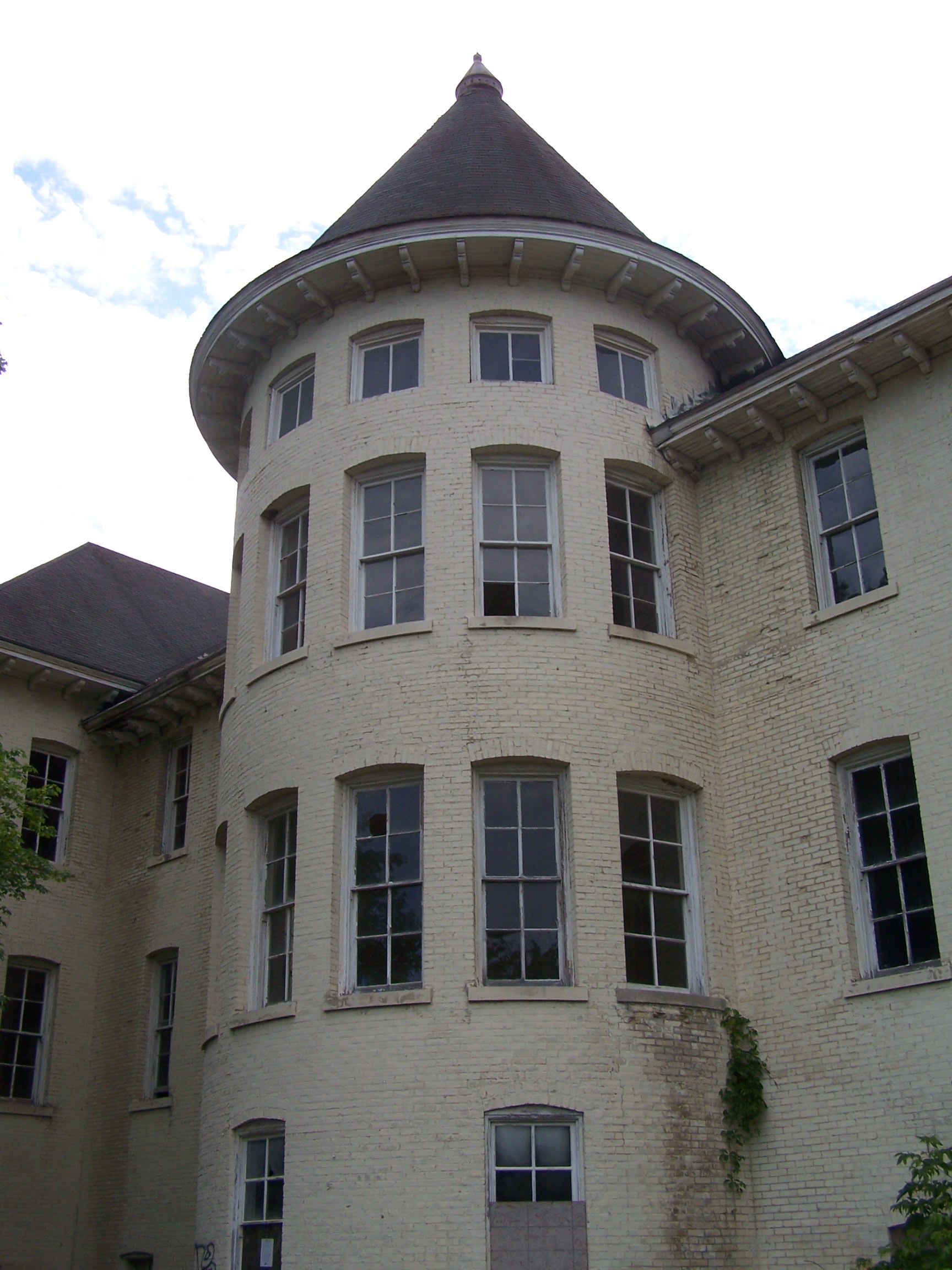 A building waiting to get restored. Picture taken in 2005.

Since our first days of exploring the old asylum, we’ve had tons of emails about people experiencing strange phenomena when the grounds could be easily explored. Among the many “strange vibes” people got near the buildings, people reported seeing lights in rooms with no power. Strange shadows moved about the dark corridors. Some people got creepy EVPs (electronic voice phenomena). Psychics claimed they were communicating with patients who had died there or were bound to the place for some reason. Whatever the experiences were, they were numerous for the urban explorers of this once desolate collection of buildings.

Nowadays, things are a little brighter at the old asylum. Gone are the dangers of lead paint and asbestos that made the place dangerous to explore on the inside. It’s now a vibrant place of urban renewal now known as The Village at Grand Traverse Commons. You can dine, shop and even live there! So while it’s really no longer a paranormal stomping ground, the history is still intense and amazing and it is still worth the visit. Who knows, you may still be greeted by a spirit in the most unassuming of places. 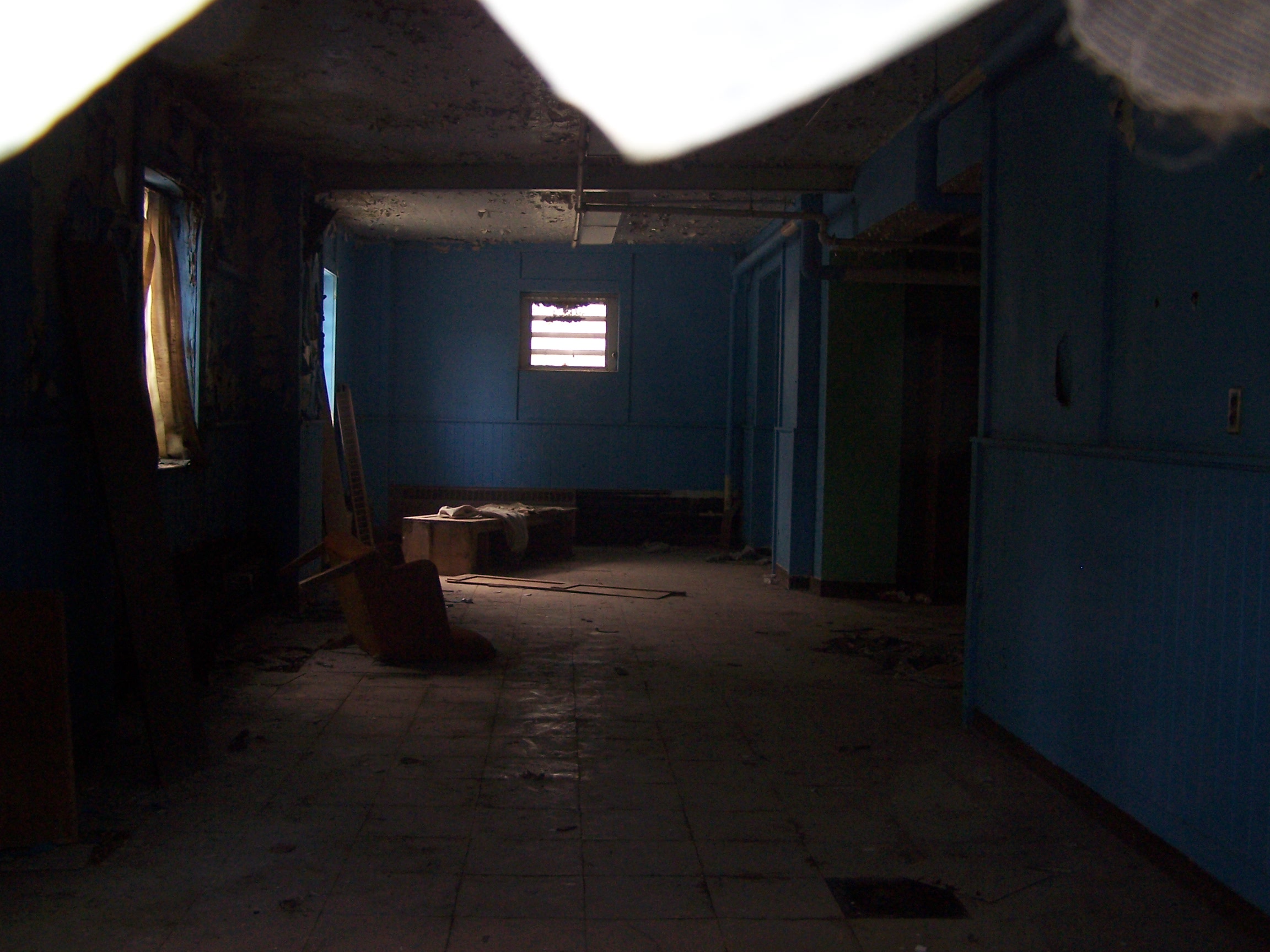 Looking through a broken window in 2006.
Photograph by Michigan’s Otherside

One of the first restaurants to open at the renovated hospital was Trattoria Stella’s. From the beginning, stories about spirit activity were talked about. I had even heard when they first opened, that they had a hard time keeping some of the staff around because they got too spooked to work there! I have no clue if that is 100% true or not but it was something I was told a long time ago.

If you have interesting stories about jaunts into the unknown territories of the Traverse City State Hospital before (or after) the renovation, send your story to add to this page. There are already plenty of stories coming in since the renovation.

Do you have a story to share about the Traverse City Aslyum?