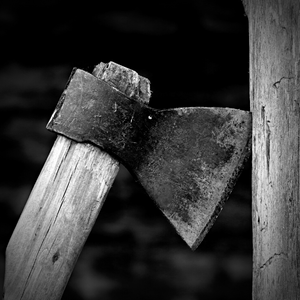 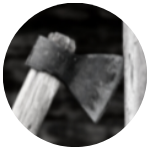 This story was submitted to the site many years ago around 2008 and I just loved it! I had never heard of it before but thought I’d share it in case others had. If you’ve heard of Hatchet Man road in this area, please comment below and share your story. Most likely an urban legend, a Hatchet Man story also exists in Ohio and involves a tale where the husband flipped out and killed his family with a hatchet.

The strange bursts of light also suggest the possibility of UFO activity in the area. In fact, I got that feeling more than something ghostly.  According to the author of this story, “Hatchet Man Road” is near Gobles, Michigan, sort of between Gobles and Kalamazoo. – Mysterious Michigan

Aa few years ago, my friends and I were bored one early morning and lost for something to do, we drove out to the road. This road is a patch of 28th Ave, between M-40 and 9th street. There are several small sections of this road and it’s quite long. I chose those two roads as they are main roads in the area. Though I am unsure where he got this information, the friend in question claims that the legend states:

A fellow in the 1980’s built a fallout shelter beneath his home for his family. Paranoia growing greater, he took his family down there to live. At some point, he lost it and killed his entire family with a hatchet and thus the road got its nickname: Hatchet Man Road. I visited the site where supposedly his fallout shelter was and believe me it was creepy! An overall bad feeling. I have been known to sense the paranormal, having several other occurrences throughout my life that are too numerous to mention.

In any event, we pulled onto that section of the road and my friend who was driving brought his car to a complete stop. I was watching. He let go of the break and left the car in drive, idling. Now I understand cars can idle at 10-15 mph. He was idling at 35. I found that odd. Now, I feel I should tell you that this section of the road is completely flat, so increased speed due to a hill is not possible. At roughly the center of this road is a small stream, containing some of the clearest waters I have ever seen. There is a small bridge over it for traffic and an area to one side where you could park safely off the road. Dotting this road are several two-tracks, some with campers on them, I suspect for hunting. Other than that there are no houses. This is mostly due – again I am surmising – to the fact that most the area is a wooded marsh. At that stream is where the car just simply stopped moving. We popped it in drive and traveled down the road. At the end, we turned back around and for no apparent reason, the CD adapter flew out of the tape deck. Our speed was not so great as to cause that. It literally flew out. This led to a couple other expeditions to this road, in which we walked.

“…we began to see several basketball-sized flashes of orange to red light always just ahead of us and off to the sides of the road. We saw silhouettes crossing the road, and a few of us saw a short-ish shadow peeking out at us from behind the trees periodically.”

This is where the story gets interesting. Our first encounter on foot led us all to see several potentially supernatural occurrences. As the eight of us began our trek down the road on foot, parking by the previously mentioned bridge, we all realized how dark it was. Clear night, some ambient light from above should have been present, but it was very dark. Shortly after our observations of the darkness, we began to see several basketball-sized flashes of orange to red light always just ahead of us and off to the sides of the road. We saw silhouettes crossing the road, and a few of us saw a short-ish shadow peeking out at us from behind the trees periodically. Then I saw the most vivid full apparition I have to date. Just up ahead of us, on the opposite side of the road, I saw a white shade. I feel it was female or at least appearing so. I wasn’t the only one who saw it, but when I mentioned it, the shade disappeared. A minute or so later it reappeared further up the road. At this point, we heard an owl’s hoot that slowly twisted into what sounded like a moan of pain, possibly from the female who showed us this place.

A guy who loves looking for ghosts got seriously scared for the first time I have seen since our friendship began. We all abruptly turned around and left. Later I brought some other friends for a drive down the road and one of them claimed to have seen an apparition similar to what I had seen on the opposite end of the road. For my birthday this year, the idea came about by my newest group of friends to go out to the road since none of them had ever been there. I can say we saw very much the same thing. The flashes of light, though no apparitions. But something new was seen by all of us. Near the end of our walk, I saw a narrow beam of gold light come down from the sky and end in a basketball sized flash of gold. We all saw this and I felt the energies from it. The best description to compare it to was a gold sparkler. Now I have no idea what really happened out there, but something is very much going on there and I would like others to know about it. As it stands, that is the biggest enigma of our area. To continuously see things out there, even with new people, simply proves that all is not right on 28th avenue.

I honestly don’t know much of the history of that chunk of road. In fact, I used to take that road to work and always thought it was a little creepy. Heck, I actually got a flat tire on that road once one morning en route to work. If it is a local legend I hadn’t heard about it prior to the first encounter in the car.

I have to say there is something not right there. There have been reports of a ghost car. Another friend drove down that road and passed a car that had apparently caught on fire recently, as it was all burned up. He turned around to take another look and by the time he got back to where he saw it, it was gone. This is interesting because I had forgotten to mention the headlights we saw on our most recent expedition. Near the end of our walk, we kept seeing headlights of an oncoming car, but the car never showed up. Finally, we saw headlights off a bit down the road that kept randomly flashing. Looked like it may have been parked on the side of the road. We also thought it could have been reflections of some kind from the crossing road. We realized it could not have been that as there were no proper angles of reflection, or anything to reflect off of for that matter. We saw nothing. Not even a car. It was freaky. Then all this stuff started happening and suddenly I remembered it. It actually came back to me as I was telling someone that I have never had any paranormal experiences. Odd how that works eh? Suddenly I am seeing things in the oddest of places. I would say it could be misinterpretations if other people hadn’t seen the same thing.

“I heard about Hatchet Man Road being haunted when I was in middle school in Gobles. I didn’t believe in ghost stories before. Now, I’ve been on that road during the daytime and have never seen anything, but the legend is that it’s only at night. The small stream there fills with huge salmon every fall and we would go see them. In 2005, I went down that same road with the stream that was mentioned in the story. I am too scared to walk it at night so I drove down there at night and before I even got halfway down the road, I saw in my rearview mirror bright headlights and they kept getting closer. I was like, “What’s wrong with this car! They are tailgating me!” So I drove faster and they continued to tailgate. I passed the river and continued on, but the car followed me to the end of the dirt road.

I turned around in a driveway off of Hatchet Man Road and waited for the car to come out because once I reached the end of the dirt road, it disappeared. I thought that impossible, so I turned around to see if it would come out but it didn’t. It was gone. So I went back down the road and it was completely gone…nowhere from one end to the other. I have not been on that road at night since, but that was enough to make me believe that it is haunted there at least by a car! Like an old 1970s or 80’s Lincoln or Grand Marquis – one of those huge wide cars. I never heard of the man who killed his family but I have never been out in the woods there. I am now curious to go see where this shack is but in the daytime.” – S.L.