During the late 19th and early 20th centuries, circus sideshows were popular forms of entertainment. Carnival barkers lured audiences into darkened tents with stories of tattooed men, sword swallowers, and human skeletons. Spectators were thrilled at the daring deeds of strong men, fire breathers, and glass eaters. And, of course, no sideshow was complete without a bearded lady.

One of the era’s most popular bearded ladies hailed from Michigan and is, in fact, buried in Maple Grove Cemetery in the northern Michigan community of Leetsville. That woman is Grace Gilbert. Gilbert was born in Ohio in 1876, the youngest of Giles and Arosina Gilbert’s four children. Within minutes of her birth, Gilbert’s parents knew that something was different about their new addition. At an age when most babies have smooth, clear skin, the infant’s body was covered with fine, silky hair that only became thicker as she aged.

By the time Gilbert was 18 months old, a newspaper article was reporting that the hair on her head was a foot long and that she had three to four-inch-long whiskers on her face. The phenomenon, according to the reporter, was “the greatest living curiosity we have ever seen.” As Gilbert reached adulthood, she realized that career opportunities (and, in all likelihood, marriage prospects) were limited for a woman with a full beard, so when she was 18, she began appearing in sideshows.

In 1901, the same year that Gilbert moved with her family to Kalkaska County, she signed on with Ringling Brothers Circus, one of the nation’s largest big tops. She was a sought-after attraction, as her beard, at 18 inches, was significantly longer than those of other bearded ladies at the time. In 1903, Gilbert left Ringling and joined its competitor, the Barnum & Bailey Circus. She stayed with Barnum until 1905, then signed on with a few other circuses, which afforded her the opportunity to tour England and France. 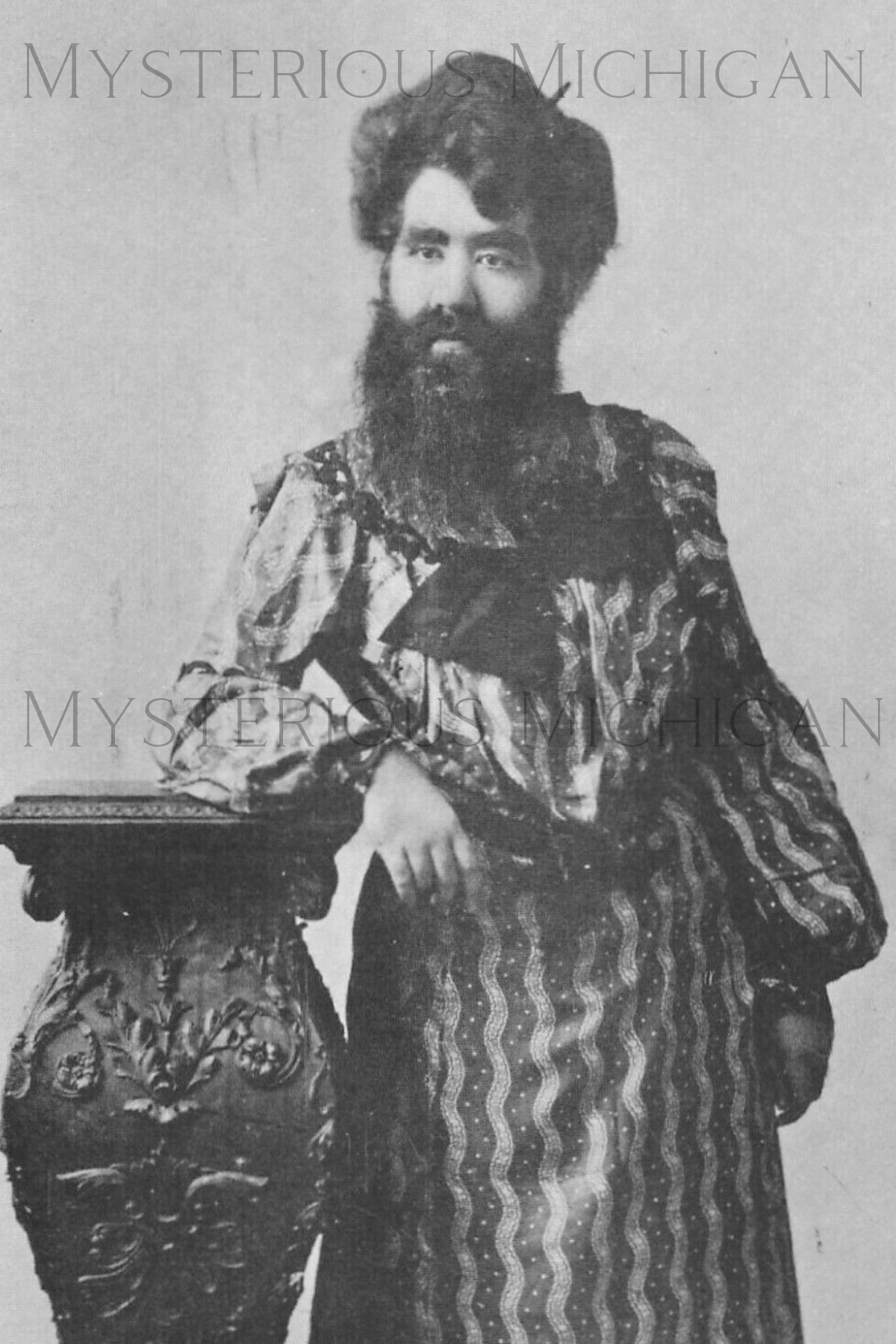 Unlike many sideshow acts, bearded ladies didn’t perform feats of strength or skill. Their only job was to appear before audiences in all their feminine, yet hirsute, glory. Personality-wise, Gilbert was very much a lady and enjoyed stereotypically “female” pursuits like sewing. However, she also had a stocky physique that lent itself to physical labor. Gilbert was happy to use her strength to assist with chores around the circus, and often helped raise the big top (i.e., the main tent) at each new stop.

By 1910, Gilbert had been traveling with sideshows for about 16 years. Despite the fact that she had been on the road for so long, she was able to find romance with a childhood sweetheart—Giles Calvin, whom she married that year during a ceremony in South Bend, Indiana. Gossips immediately got to talking, and not only because of the fact that the Bearded Lady was now married. Calvin was Gilbert’s cousin, and Gilbert had, in fact, lived with him after her father died in 1907. The suspicious-minded insisted that the marriage was a publicity stunt. To prove them wrong, Gilbert announced her retirement from sideshows and went to work on her husband’s farm in Kalkaska.

However, by 1906, realizing that the circus life was more lucrative than farming, Gilbert returned to the circuit and began appearing at Coney Island, New York. For the next eight years, she and her husband spent summers at Coney Island, and then returned to Kalkaska during the offseason. Gilbert kept up this schedule until the winter of 1924, when she fell ill, complaining of a sore throat. Unfortunately, her ailment proved fatal, and she died on January 24. She was buried in Maple Grove Cemetery, next to her parents. Her husband joined her twelve years later after he died in 1936.

According to people who lived in the Kalkaska area at the same time that Gilbert did, the bearded lady was forced to wear a veil around town so that her appearance wouldn’t startle pregnant women who might be walking along the street with her.

So what caused Gilbert’s hairy countenance? While it can’t be stated for certain in her case, many “bearded ladies” have hormonal imbalances or a disorder known as hypertrichosis, both of which can cause abnormal hair growth.