Ghosts of the
Kirby Grill

There seems to be more to the Kirby Grill bar and restaurant in downtown Grand Haven than the good wood stove pizzas. For years, rumors have been going around that the place is haunted, especially the second floor.

One employee and friend I spoke with claimed he had seen a child running on the second floor after hours and heard his name said behind him, only to find no one there. Other employees have witnessed similar things. Experiences have also been had in the wine room in the basement. One employee thought his boss was downstairs with him and saw someone standing there, but when he fully looked up, no one was there. Another bartender saw a full apparition when he was younger, working as a busser. Most of the staff just call the ghost “Emily” and when something strange happens in the old place, they just say it must be her. 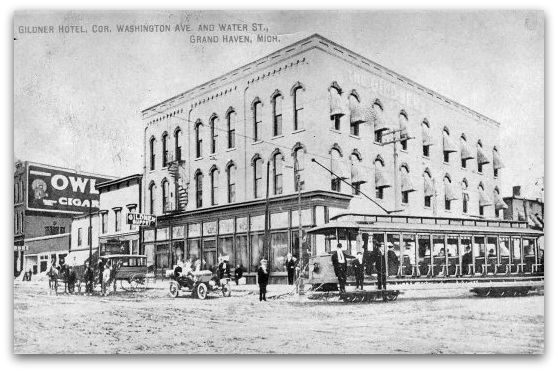 The Kirby Grill when it was known as the Gildner Hotel in 1900.

The Kirby first began as a hotel built in 1873 and has changed eleven times since then. In 1900, the hotel was bought by Henry Gildner and renamed the Gildner Hotel. After its hotel days were done, the building was home to many different restaurants, one of them being Win Schuler’s, creator of that super delicious bar cheese. It’s been said Marion Schuler, who was married to brother Albert Schuler, created the tasty recipe while living in Grand Haven.

The Kirby also sits on the location of Grand Haven’s first permanent home, built by William Ferry, the town founder and also the alleged ghost of the Blue Man legend. The house burned down in February 1866. Could the fire have anything to do with the ghosts people have seen?

This eerie email was sent back in 2005 about a paranormal experience at the Kirby Grill during renovation:

I’ll tell you what I was told. A couple of guys I grew up with had taken jobs on the renovation of the upstairs area when the place was Lord Peppermills. They had some very disturbing experiences and I haven’t been able to look at the place the same since. It was really cold in the morning and so they would take turns going in early to start the heater and get things set up for the day. Each one of them had seen the same thing but had not said anything until sometime after the job was done because they were afraid the others would make fun of them. Then one evening after a couple of beers, one of the guys couldn’t keep it in any longer.

He said that he had seen a dark figure in a long coat and a cowboy-type hat. It was mostly just a dark shadowy outline at the end of a kind of hallway. But he said the most disturbing part was that the eyes looked red and glowing almost and he was filled with a sense of danger. He said that he knew that whatever it was, it was not something to mess with. So, he just turned and went downstairs and waited for the rest of them to get there. Apparently, all of them had experienced this same thing and were so shaken that they couldn’t talk about it for some time. I know this is a second-hand story and you can do with it what you will. But I know these guys, and they were not joking.

Have you had an interesting experience at The Kirby Grill or downtown Grand Haven? Tell me your story!