Alexis St. Martin: The Man With A Hole In His Stomach

Alexis St. Martin: The Man With A Hole In His Stomach

Written by Tonya Blust | Michigan 101
Alexis St. Martin lived one of the weirdest lives on record. Not only was he unfortunate enough to have part of his stomach blown off during an accidental shooting on Mackinac Island in 1822, he also spent the next ten years as guinea pig to a doctor who, among other things, dangled bits of food into St. Martin’s unhealed wound to study the effects of digestion, a process that wasn’t well understood at the time.

St. Martin was a 20-year-old Canadian voyageur who, in June 1822, worked as a fur trader for the American Fur Company. (Side note: Some sources claim that St. Martin was born in 1794, which would have made him 28 in 1822, but this information is incorrect. St. Martin had a brother, also named Alexis, who was born in 1794 and who died in 1802. It’s the older Alexis these sources are inadvertently referring to, not the “guinea pig” Alexis, who was born the same year his older brother died, in 1802.) During a stop at a Mackinac Island trading post, a fellow voyageur accidentally discharged his musket, spraying bird-shot into St. Martin’s left side. Dr. William Beaumont, a physician at nearby Fort Mackinac, was quickly summoned, and though Beaumont treated the victim, he expressed doubt that St. Martin would survive. 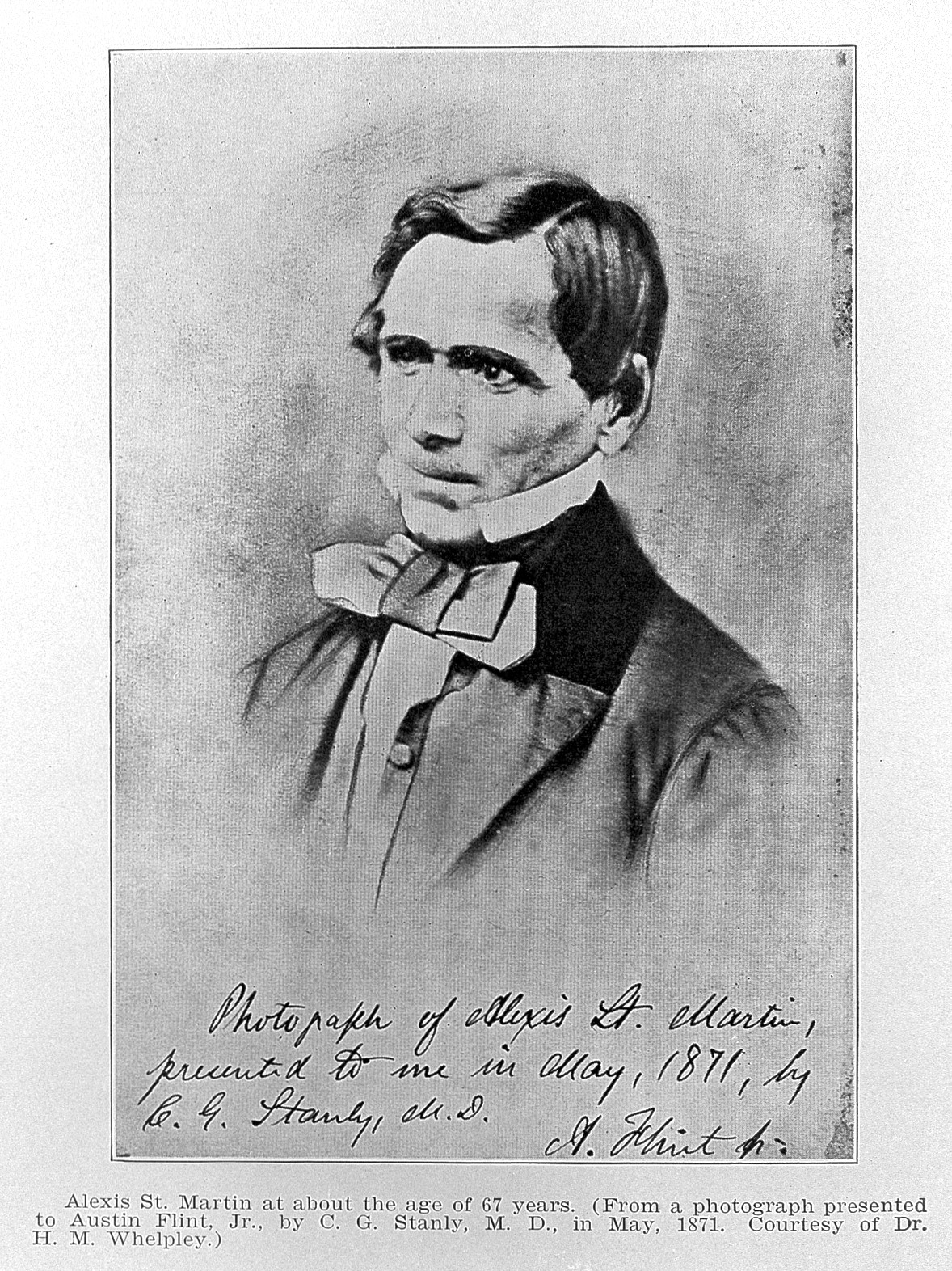 St. Martin defeated the odds and overcame his injuries…except for one. The edge of the wound in his stomach had attached to the edge of the hole in his skin, forming a fistula (in essence, a passageway) that provided easy access to whatever was going on in St. Martin’s stomach. Beaumont realized the research opportunities that St. Martin presented. Because the voyageur’s injury prevented him from going back to work for the American Fur Company, Beaumont hired St. Martin as a laborer, assigning him chores like chopping wood, hauling heavy items, and letting Beaumont dip bits of food attached to silk strings into his stomach so that the doctor could observe the digestion process. Beaumont made many discoveries and published his findings, becoming known as a preeminent expert in human digestion, and eventually earning the very specific title of “Father of Gastric Physiology.”
To dissuade curiosity seekers who might want to conduct illicit autopsies on him, St. Martin’s family left his body in the sun to decompose, then buried him in a secret location that wasn’t revealed until 1962.
In 1825, Beaumont moved to Fort Niagara in New York, and St. Martin accompanied him. However, the former voyageur grew tired of his work with Beaumont and returned to Canada, where he married and eventually fathered several children. (St. Martin could live a relatively normal life by putting a plug in his fistula to prevent things from getting in or out.) St. Martin intermittently reunited with Beaumont so that the latter could conduct more experiments, but their partnership ended in 1832 when, while working with Beaumont in Washington, D.C., St. Martin received word that one of his children had died in Canada. St. Martin left, and though he and Beaumont discussed plans to resume their experiments, he never returned.

Dr. William Beaumont
Beaumont eventually moved to St. Louis, Missouri, where he died of a closed-head injury in 1853 after slipping on ice. St. Martin survived for a few more decades, dying in 1880. To dissuade curiosity seekers who might want to conduct illicit autopsies on him, St. Martin’s family left his body in the sun to decompose, then buried him in a secret location that wasn’t revealed until 1962.
While St. Martin’s position in history has essentially been that of a footnote, Beaumont is still esteemed, especially in the state where his revolutionary experiments began. He is the namesake of William Beaumont Hospital in Royal Oak, Troy, and Grosse Pointe, as well as the Oakland University William Beaumont School of Medicine. To try to even the score, albeit in a small way, I’ll end this post with a photo of Alexis St. Martin and his wife, Marie, obviously well into their golden years, but still enjoying each other’s company. (Well, at least Alexis is…I’m not so sure about Marie.)