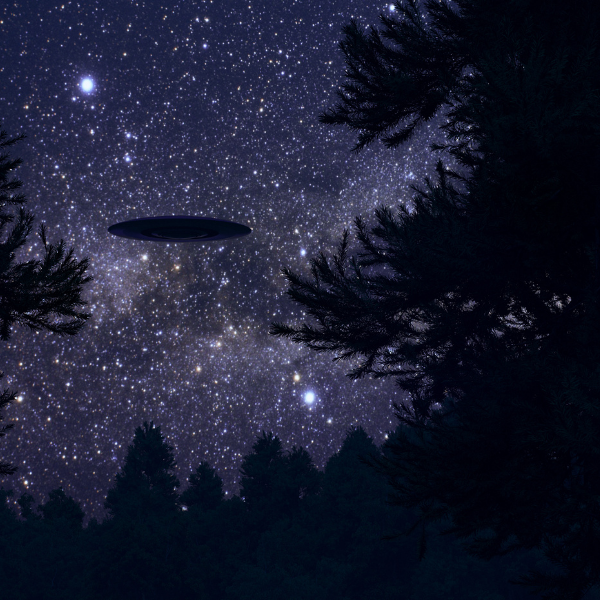 March 14 started a week in Washtenaw County, Michigan that would bring it into the spotlight. UFOs were being spotted by very trustworthy policemen. Radars showed UFOs on their screens. Josef Allen Hynek was sent by the government to investigate. All this led up to one of the best-known UFO cases in Michigan — the Swamp Gas Case.

President Gerald R. Ford, then a Michigan Congressman, said later of this event, “In the firm belief that the American public deserves a better explanation than that thus far given by the Air Force, I strongly recommend that there be a committee investigation of the UFO phenomena. I think we owe it to the people to establish credibility regarding UFOs and to produce the greatest possible enlightenment of the subject.”

March 14 – Deputy Bushroe was driving in his cruiser when he noticed something strange in the sky. What he saw was a line of four UFOs that he watched for about one hour. “It would swing back and forth like a pendulum, then shoot upward at tremendous speed, hover, and then come down just as fast,” Bushroe later told the press. His sighting was confirmed by his fellow officers.

A few days later on March 17, Sgt. Nuel Schneider and Deputy David Fitzpatrick were driving in Milan when they viewed top-shaped UFOs flying through the sky. They said the UFOs seemed to defy gravity and that the lights dimmed and brightened with the speed they were traveling.

On March 20, in Dexter, Frank Mannor saw a domed oval-shaped object with a quilted pattern. He said it had lights in the center and noted that the thing landed in the swamp. He called the police and Deputies Fitzpatrick and McFadden came to search for the object. They found it and as they walked closer, it started to rise. Mannor said, “While in the woods area, a brilliant light was observed from the far edge of the woods, and upon [our] approaching, the light dimmed in brilliance… the brilliant light [then] again appeared and then disappeared. A continued search of the area was conducted, through swamp and high grass, with negative results.” The UFO moved to where the Deputy pointed his flashlight, and it took off at a high speed. As more officers arrived, Officer Robert Hartwell (or Hunawill, sources use different names) of the Dexter division, saw a UFO buzz the top of his car.

Samples from around the area of the March 20 sighting were sent to a lab to be tested. Tests were done on the soil, plants, water, and animals. The results came back and read:

SOIL: The soil had above normal radiation and also had abnormal content of Boron.

PLANT: The plants had above normal radiation. Blue pigments did not show up in the tests and were presumed to be destroyed, but this did not seem to effect the life junctions of the plants.

MINERAL: Sedimentary rocks were slightly higher in radiation than either igneous or metamorphic rocks. There was no other change either chemical or structural.

WATER: All microscopic plants and animals were dead. The water had above normal radiation and abnormally contained Boron.

ENVIRONMENT: The environment had above normal radiation and it contained a small amount of Boron which is foreign to this soil.

MAIN CONCLUSION: The area contained an abnormally high amount of radiation from some unknown source. The area also strangely contained Boron which was found in both water and soil. These two facts are the only ones which would substantiate the presence of a UFO. In our opinion, we’re not saying that there was a UFO, but we also do not know how to account for these two facts. However, we believe it could not be swamp gas because of the high winds on the night of the sighting. With these high winds the gas would not have formed a mass and remained stationary. We also do not believe it was pranksters because we searched the area thoroughly for any sign of evidence to explain the phenomenon.

NOTE: Radioactive decay took place at 0.6 milliroentgens per hour over a period of three hours.

Dr. J. Allen Hynek from Project Bluebook was sent in to investigate. At first, he agreed that something weird was going on, but when he consulted Bluebook headquarters, he quickly changed his mind to the explanation of “swamp gas.” The Washtenaw County Sheriff Douglas Harvey said, “Dr. Hynek was sent in from the U.S. government. He came into my office. We went out to the site where supposedly this object came down on the ground. Dr. Hynek in the car said, ‘There is something. We just can’t put our finger on it. We’ve been investigating this for quite a while.'”

The Van Horn Report was issued in 1984 and it shed new light on the case.

On the evening of March 21, 1966 at 10:32 p.m., a call was received from the New Woman’s Dormitory at Hillsdale College by the Office Of Civil Defense… from a student reporting that some type of craft had descended from the Northeast, flashed by their dormitory and disappeared to the south. At this time, the girl described as well as later, the observing of red, green and white pulsating lights. There were 17 college students that made this observation.

At approximately 11 p.m., a second call was made by the girl to the Civil Defense Office informing them that the object had reappeared and had settled close to the ground approximately one half mile from the dormitory. Van Horn at once called for help from the Police Department and three cars plus himself were sent in a two mile area from the dormitory to the East. Van Horn checked the area at the half mile point and after he was unable to locate anything. He at once returned to the dormitory.

Upon arriving at the dormitory, he was escorted to the second floor and taken to a room facing the east, from where he made the following observation. He observed that there was an object which was at an approximate distance of 1,500 to 1,700 feet away from them… settled into a hollow and was apparently either near or on the ground. The two lights upon his first observation were what he would describe as a dim orange on the right and a dirty white on the left. After observing this for a period of about 10 minutes the lights began to grow in brilliance, the dim orange became red and true in color and the white became a true white. As the lights became more brilliant, the object or vehicle began to rise.

It would rise to a height of approximately 100 to 150 feet, stop momentarily and began to descend. This occurred several times. At one time upon descending, a glow from the side opposite them came from somewhere and he was able to see a convexed surface. “The vehicle was also observed to move right to left, and left to right, and did so in a very smooth manner. The ascent and descent were at an estimated rate of 25 to 30 feet per minute. At no time were any of the witnesses able to detect any type of sound or noise.” At approximately 4:30 a.m., those still observing the scene noticed the lights disappear and this was the last that was seen of it.

The area that this was observed in was by no means a swamp but rather an area that is cultivated by Hillsdale College as a park. From the last part, you can see that not all of the sightings were in swamps, therefore, swamp gas could be ruled out. The 1966 Michigan Swamp Gas Cased ended up becoming a famous case. There are loose ends in the story and we may never know what truly happened in that week in March of 1966.