The Top Haunted Lighthouses in Michigan

Ghosts and lighthouses are synonymous with each other and Michigan has the most lighthouses of any state in the U.S. At one point in Michigan history, we had over 200 working lighthouses on our lakes. Humans might not have a hand in guiding the ships along the lakes nowadays, but the ghosts of past lighthouse keepers are still doing their jobs – even if they are dead. Enjoy learning about just a few of Michigan’s well-known haunted lighthouses and the stories behind them. Because what’s a lighthouse without a ghost?

WAUGOSHANCE – ONE OF THE OLDEST LIGHTS ON THE GREAT LAKES

According to maritime historian Wes Oleszewski, the Waugoshance ghost story is always the first told by lighthouse enthusiasts and historians. Waugashance is located on the northeast end of Lake Michigan and was built in 1832 as a lightship. It became an actual lighthouse nineteen years later in 1851. John Herman, a drinker and a “funny man” was a lightkeeper at Waugashance. He began his career as an assistant lightkeeper in 1887 and in 1892 became the man in charge.

Drunk one night and looking to play a practical joke on a co-worker, John locked one of his assistants in the lamp room. Happy with his prank, he wandered away from the lighthouse and in his drunken stupor, vanished into the night, never to be seen again. Once the assistant managed to get out, he looked everywhere but never found John.

After his disappearance, strange things started to happen around the lighthouse. If any of the lightkeepers fell asleep on the job, their chair was kicked out from beneath them. Everyday chores, such as coal buckets being filled, would also mysteriously happen on its own. Because the haunted happenings were so frequent, they eventually had a hard time staffing the light, so they built a lighthouse at White Shoals and left Waugoshance to the ghost who haunted it, or so that’s what the ghost story says.

EXPOSING THE FACTS: IS THE HAUNTING REAL?

“Considering that so much of lighthouse history has been lost, sometimes all that we have is legend,” writes Wes Oleszewski in his book, Lighthouse Adventures. Waugoshance is one of the oldest lights on the lakes and not many historical records exist for it. Based on his research, after John’s long tenure as a lightkeeper, the turnaround rate of employees and keepers was about the same before John. Oleszewski points out that the turnaround for offshore lights, especially remote ones like Waugoshance, was always high.

As for them building another lighthouse to avoid the ghosts? The lighthouse was in fact, outdated and a new one was badly needed. There doesn’t seem to be any historical evidence of John’s death at the light either. The only keeper ever to drown at the light was Thomas Marshall on May 28, 1886. The ghost story about John supposedly came from a newspaper article published in Petoskey sometime in the 1930s. After the light was abandoned, people nicknamed it, “Wobble Shanks.”

Maritime author and avid publisher of Great Lakes ghost stories, Frederick Stonehouse, writes that there are two ghosts residing at “Wobble Shanks.” A legend says a worker was killed during the lights construction and his cries can sometimes be heard.

HOW TO VISIT WAUGOSHANCE LIGHTHOUSE
Sheplers Ferry Service out of Mackinaw City offers a number of lighthouse cruises during the summer season. Their “Westward Tour” includes passes by White Shoal, Grays Reef, Waugoshance, and St. Helena Island. For schedules and rates for this tour, visit their website at www.sheplerswww.com 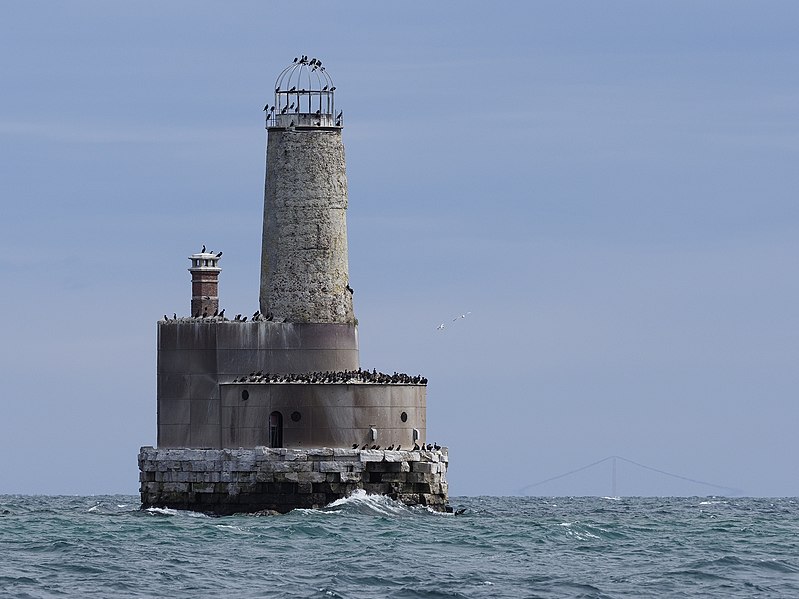 The very secluded Point aux Barques lighthouse was built in 1847 near the tip of the thumb along Lake Huron. Author Wes Oleszewski writes in his book Lighthouse Adventures, how he felt he captured a ghostly form pulling back the curtain in the living quarters while taking pictures of the lighthouse. The photo spooked him out seeing he had always considered himself of the “scientific” sort.

The ghost of a 1930’s cleaning lady has been seen by a few people over the years. In search of the ghost, Wes did research and went as far as the National Archives to try and find the existence of a woman who fit the description of the apparition that people witness, but nothing was found.

Point aux Barques is now a museum open to the public. To learn more about visiting this historic lighthouse, visit the links below. 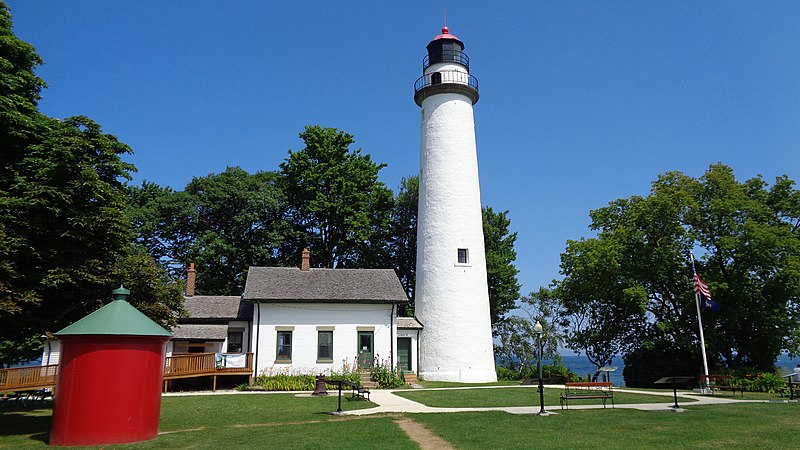 New Presque Isle near Alpena, is one of the tallest lights on the Great Lakes at 113 feet and was built in 1870. Isolation and loneliness are common themes in lighthouse ghost stories and this tale is the Michigan version of The Shining.  The most famous tale of this light says the lightkeeper went insane from the isolation and shut his wife up in a tunnel on the property.

Another version says the lightkeeper had a lady friend on the side and stuffed his wife in the tunnel when he went to go see her, making sure his wife couldn’t meddle with his adulterous activities. He then eventually killed his wife.

There is no evidence to suggest these stories are true, but over the years, the stories wrapped themselves around Presque Isle and are now part of the lighthouse’s ghostly lore.

Lighthouse keepers back in the day took their job very seriously. It was up to them to guide ships around dangerous waters and steer them away from danger. If a lightkeeper didn’t do his or her job correctly, lives could be lost. Could that be why we hear about so many lighthouses being haunted by their old keepers? Perhaps that’s why William Robinson, the first keeper of the White River Light Station still watches over the place. 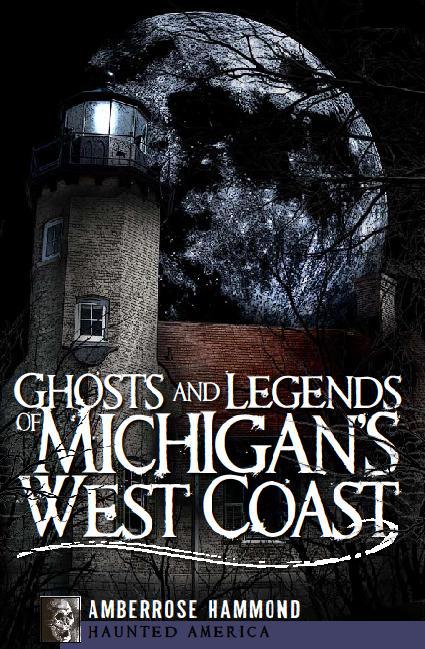 The beautiful White River Light Station graces the cover of the first book I wrote.

The White River Light Station was built in 1876. Lightkeeper William Robinson devoted 47 years of his life to the light and was forced out of his position due to age. His oldest grandson took over, at least keeping the job within the family, but William wasn’t allowed to live at the light. Only his son and immediate family were allowed to stay there. Author Frederick Stonehouse writes in his book, Haunted Lakes, that William told his grandson, “I am not going to leave the building” and he died the day he was supposed to leave.

An alternative story also says that he and his grandson simply did not get along. William felt he could still do his job no matter what, but the grandson, William Bush, was in charge and the Lighthouse Service in 1919 told Robinson to move on. Depressed, William died soon after and it would seem he got his wish to stay behind and continue his “afterlife” at the old lighthouse.

It seems the second floor of the White River Light Station is his stomping grounds in the afterlife and phantom footsteps have been heard occasionally. Karen McDonnell, now retired, was the curator of the White River Light Station Museum for over 20 years. The Muskegon Chronicle interviewed Karen McDonnell and she doesn’t claim the lighthouse has any ghosts or extreme paranormal moments around every corner. What she does admit though are phantom footsteps on the second floor, receiving a brief flash of a couple looking out the top story window, footsteps in the stairwell, a light blinking strangely in the tower and the feeling that Captain William Robinson and his wife Sarah are still around.

Addendum – If you happen to pick up a copy of my book Ghosts and Legends of Michigan’s West Coast, I slipped the wrong photo of Captain William Robinson’s grave in the book and it totally took seven years for someone to point that out to me! I took a picture of an older tombstone and William’s is actually a smaller, more unassuming and “newer” one to the right of the stone I took a picture of. Next time I get to his grave I’ll snap a new picture. It was my first book…go easy:) 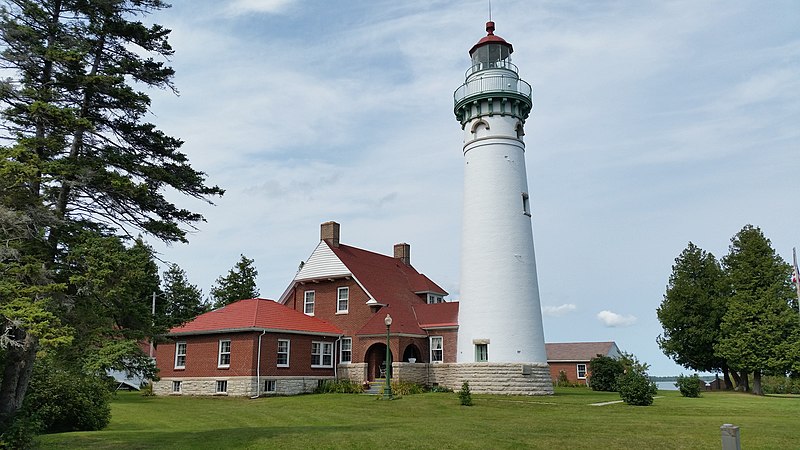 I guess a lot of people mispronounce “Seul Choix” and I don’t blame them. While reading Weird Michigan, author Linda Godfrey wrote how the locals gave her a dirty look when she asked for directions to the “sool choy” lighthouse. It’s pronounced like “Sish Schwah” and means “only choice” in French.

Located in the Upper Penisula in Gulliver, the light was built in 1895 and is rumored to be haunted by none other than its lightkeeper, Joseph William “Willy” Townshend. He was a sea captain and became the keeper of the light in 1901. In 1910, he died in his bedroom at the light and people claim they have spotted his ghost in mirrors, looking out windows, and even in the woods nearby. Phantom smells of cigar smoke and objects moving on their own have also been reported by volunteers.