What do symbols on old tombstones mean?

Have you ever wondered what some of those strange symbols on old tombstones mean? This list represents some of the most common symbols found in many Michigan cemeteries and around the Midwest.

Anchors – Represents hope and steadfastness. It can also be a symbol of the nautical life which was the case for many Michiganders working and dying on the Great Lakes.

Broken Column– Life cut short and life coming to an end. A very popular symbol in the 19th century. 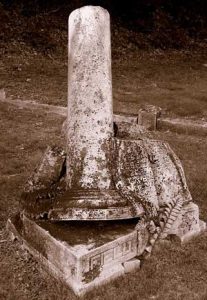 Closed book– Many represent the Bible but they can also stand for a life completed.

Curtains– Passing into another existence. Protection. 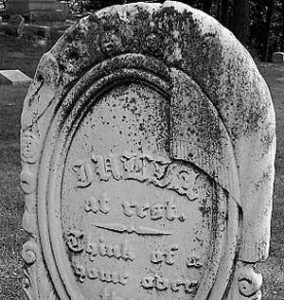 Dove– The dove is a very common animal symbol, mostly because of its Biblical meaning. Usually holding an olive branch which refers to Noah from the Bible. Also a symbol of purity and peace.

Fingers Pointing Up– A symbol of the soul rising to heaven.

Flowers – Flowers have been a part of remembering our dead for thousands of years. Of course, those Victorians were the ones to really put flowers to good use when it came to the cemetery. Not all flowers are the same on tombstones. Meaning can vary depending on what type of flower is carved in the stone. In the picture below, a rose is carved into the white marble. In Christianity, the rose became associated with martyrdom and was also associated with women, therefore many roses are found on women’s graves but not all the time. The tombstone below actually belongs to a man who died at age 33. 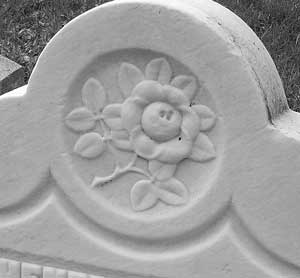 Hand Pointing Down – Read my story about Witches Graves, Curses and Hell Hands to learn more about the downward-pointing hand. 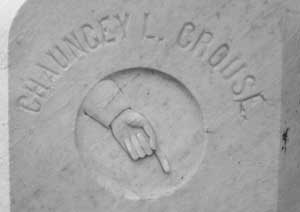 Hands shaking– Matrimony. Sometimes there is one masculine hand and one feminine hand. Look at the sleeves of the hands. If there is no difference in the sleeves, then the hands are a symbol of being greeted into heaven or saying goodbye from earth.

IHS and IHC– Many times these letters are seen connected with each other. IHS comes from the first three letters of Jesus’ name using the Greek alphabet: Iota, Eta, Sigma.” IHC stands for the same thing but is Roman.

Lambs– Innocence. Usually found on the graves of children and babies. 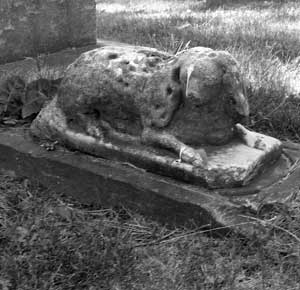 Lily of the Valley – Lily of the Valley is a common flower found on old tombstones. The flower represents innocence and purity and also renewal and resurrection due to the fact it’s one of the first flowers to bloom in the Spring. 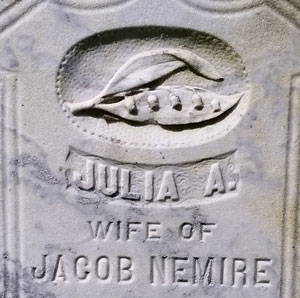 Masonic Symbol – The square and compass are one of the most popular images of the Masons. Sometimes you may see a capital “G” in the center of the compass. Some say this stands for “God,” and some say it means, “Geometry.” The masons are the largest fraternal order in the world and when you see this symbol on a Michigan tombstone, it simply means they were a Mason in life. 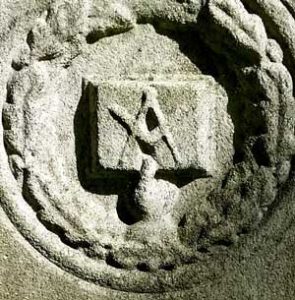 Open Book – Represents the soul of the person opening up for all to see. 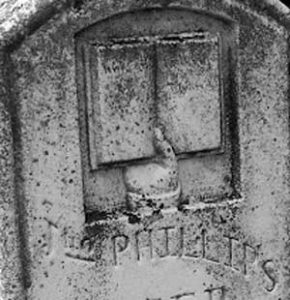 Shriners – A fraternal organization. Their full name is a mouthful: The Imperial Council of the Ancient Arabic Order of the Nobles of the Mystic Shrine. If you see this symbol, the person buried was a Shriner. 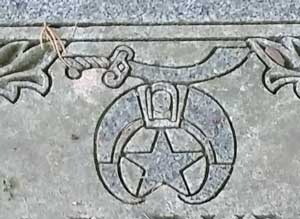 Tree Stones – Tree stones came out of Victorian art and were popular from the 1880s and through the first decade of the 20th century. These beautiful stones were usually carved from limestone. They could be ordered from the Sears and Roebuck catalog and could be tailored to fit one’s needs. Many tree stones were carved with things that meant something to the person while they were alive. 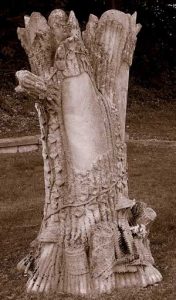 Tree stumps– Life cut short. The picture above of the tree stone shows the tiny cut stumps at the base each representing a family member.

Urns – Urns draped with fabric are a very common Michigan cemetery symbol. The drapery represents the veil between the worlds. Urns and Willow trees are some of the most common symbols found in cemeteries all over the U.S. as they were a few of the first symbols to replace the more macabre and somber New England death head effigies and other symbols the Puritans liked to use on their stones. 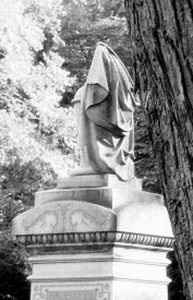 Wheat – Shafts of wheat can be found on tombstones of people who have lived well into old age and lived a long and fruitful life. Also, symbolizes immortality and resurrection. This tombstone pictured belonged to the Darrow’s from Pontiac’s historic Oak Hill Cemetery. Francis lived until 63 and her husband lived until 86. 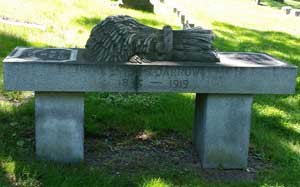 Willow Trees– Grief, sorrow, and immortality. One of the more common symbols found on Michigan and Midwest tombstones.

All photos were taken by Mysterious Michigan.