Pere Cheney, now just a lonely Michigan ghost town, was once a small but booming lumber town in Crawford County, west of Grayling. Pronounced “pair-a-shane-e”, the town was settled in the 1870s when lumbermen following the railroads set up camp. Soon, the town established a school, grocery store, post office, and much more.

Thirty years later, the timber industry had moved on and the area didn’t offer much in the way of supporting a prosperous town. In the early 1900s, only a handful of people were left living in Pere Cheney. It was declared a ghost town by 1918. The only remnants left of this place are some old holes in the ground where buildings once stood and the tiny cemetery.

Over the years, vandals have ruined almost everything that was left of the town and the cemetery. According to the book Ghost Towns of Michigan, as a teenager, a Crawford County sheriff vandalized the cemetery and afterward, was said to drive around with “a human skull in the back window” of his police car.

The current cemetery has a few scattered tombstones still standing, but most are in pieces. There were 90 people buried there. One body was moved to Chicago by family in 1945. A lonely stone in Pere Cheney Cemetery. Photo by Mike Sonnenberg
Visit this talented artist at Lost In Michigan.

Pere Cheney is a remote, spooky place and is the only remaining piece left of the town. One of the most popular legends told about the old cemetery tells of the “witch” who lived in the town and was hung from a big oak tree in the cemetery. She was then buried under the tree. Some stories say the woman of this legend wasn’t really a “witch” in the way ghostly legends like to portray — casting spells and dropping curses all day — but that she was a woman who had a child out of wedlock, something akin to being a witch back in the day. Because of how she was treated, she cursed the town.

Some legends say the town was cursed from the very beginning because it was built on sacred Native American land. Scarlet fever, smallpox, and diphtheria took the lives of many people, including children, during the few decades Pere Cheney was in existence. This sad, historical fact has given fuel to the stories and the legend of the “curse” that has grown around Pere Cheney. Searching old online message forums years ago, I found one person who confidently and matter-of-factly stated, “There are no witches buried at Pere Cheney. The townspeople would not have buried her in the town graveyard.”

Well, I guess that mystery is solved. No witches guys! Because that’s just not where they are buried.

Throughout the years, Pere Cheney has been a hotspot for paranormal enthusiasts in Michigan. There are plenty of stories on the Internet about people experiencing cold spots, apparitions, disembodied voices, and even reports of ghost trains spotted in the area. So is Pere Cheney really haunted?  The ghost town cemetery is the perfect breeding ground for legends, so most of the stories circulating are nothing more than urban legends and overactive imaginations. But many claim to have had genuine paranormal experiences while investigating. Many years ago, a former Grayling resident wrote me and had this to say:

“Is Pere Cheney Cemetery really haunted? I believe that it is but not to the extent others make it out to be. I have probably been there at least 200 times over the years and maybe ten of those times I have had something strange happen to me and others that were with me. I have had my car radio switch channels for no reason. My new car wouldn’t start once. A few times we heard children giggling very close to the car late at night.

One particular time there were small handprints all over the roof of my car after we left the cemetery and on Halloween in 2002, myself and three others saw an apparition of a woman in a light colored dress walk through the rear of the cemetery, then suddenly disappear.

I’ve never been chased. I’ve never seen a witch. I’ve never felt like someone was trying to lynch me (also one of the many Pere Cheney stories told that involves the large oak tree in the center of the cemetery). The temperature has fluctuated from time to time but it wasn’t anything worth writing home about. I do not feel an overwhelming sadness there but I do feel a peculiar energy I cannot fully explain. However, I feel this when I walk into any cemetery.” 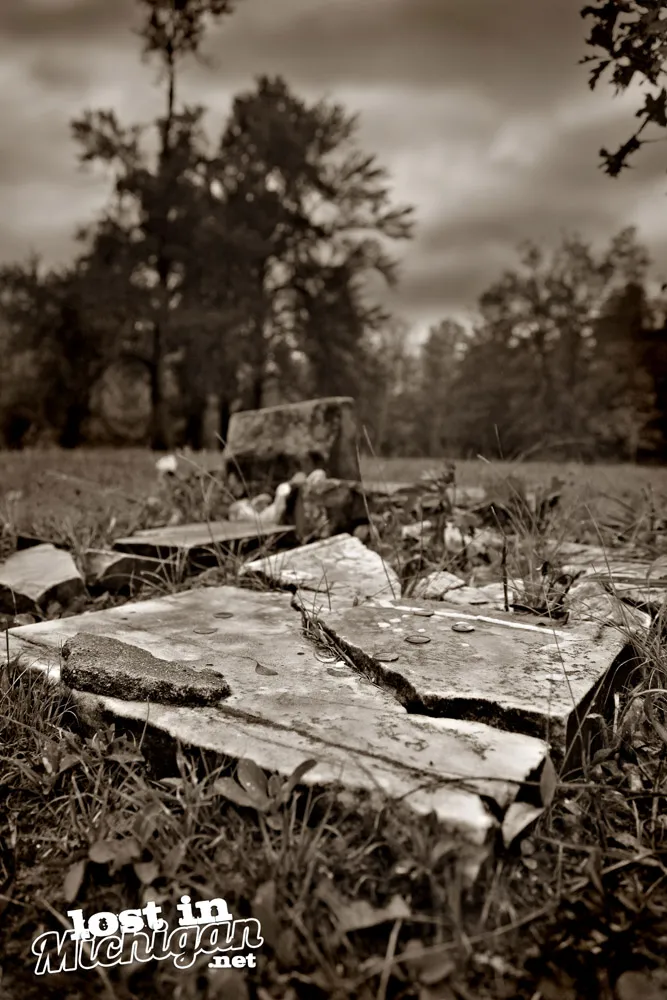 Visit this talented artist at Lost In Michigan.

The cemetery also attracts its fair share of weirdos and people not right in the head. According to the Crawford County Avalanche, the newspaper reported, “In 2001, a pair of Roscommon County teens were charged with disinterment/mutilation of a gravesite, claiming they were trying to find jewelry. They ultimately admitted that they were told there was a witch buried in the cemetery and they were trying to dig her up.” The two 18-year-olds got about four feet down but never actually dug up the body. They were caught by turkey hunters in the area and given 90 days in jail and community service.

As of 2015, Beaver Creek Township, who maintains the cemetery, has plans to restore the old place and is currently seeking ways to acquire the funds to cover the preservation costs.

WARNING!  –  Pere Cheney is in a very remote and wooded location. It’s down a dirt two-track that is not made for small vehicles and people have reported getting stuck. Please be smart if you should make a trip there. Years ago there was an actual gunman shooting at people who were venturing onto the land at night. Don’t be an idiot and get yourself shot by some weird-ass hill person. Go during the day. Visiting hours are from 9 am to sundown.

**All cemeteries should be entered with respect. Leave them like you found them. Don’t litter, don’t vandalize anything or so help me, 10,000 demons will strike you down. If the cemetery has hours posted, respect that or find out how to get permission to be there after hours. Many times a simple phone call to the right person will grant access to a cemetery after it’s closed. If you can’t get access, enjoy the cemetery during open hours. I am a firm believer that spirits don’t just come out at night. I think it’s just “ghost hunters” who only come out at night. Respect nearby private property, local residents, and don’t trespass where you do not belong.