The Ada Witch has been a popular legend in West Michigan for decades. People have claimed to have witnessed the paranormal classic, “lady in white.” She’s been seen wandering around the area of Findlay Cemetery and on surrounding roads. But who is this mysterious woman? Was she a real person?

Over the years, this spectral entity was given the title of the “Ada Witch,” but that’s nothing more than a dramatic name that makes for a good campfire tale. The story was first published in the book Haunted Houses of Grand Rapids in 1982 by Gary Eberle. The book was reissued in 1994 and the Ada Witch story gained popularity again when the surprise hit movie, The Blair Witch Project was released. Ada had its own “Blair Witch” to look for and local news and radio ran with the legend for publicity around Halloween. 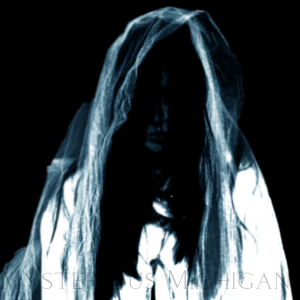 Does the ghost of a woman murdered really roam the area?
Image by Michigan’s Otherside.com

THE LEGEND OF THE ADA WITCH

Sometime during the 19th century, a woman had been unfaithful to her husband and would disappear into the night to meet with her secret lover. Her husband started to suspect his wife was up to something and one night pretended to fall asleep. After his wife got up and quietly left the house, he followed and found her in the arms of another man. Rage welled up inside of him and he attacked the adulterous couple, killing his wife first. The two men fought viciously until they both died from the wounds they inflicted upon each other.

People claim they have heard the sounds of a fight taking place in the area, only to find no one around. The land at one point had been open for hunting before much of it became zoned for residential use. There have been reports from past hunters feeling a presence around them, hearing a ghostly fight, and getting tapped on the shoulder from behind, only to turn around to no one. And of course, there are the sightings of The Lady in White a.k.a. The Ada Witch herself in the cemetery.

Ada resident Julie Wiley told news channel WZZM13 about her sighting. “I was driving home from work, heading down Bailey Dr.”, said Wiley. “I was coming up the crest of the hill and all of the sudden I see a woman sitting in the middle of the street. She had a long, flowing blue dress on. She was sitting there waving her arms, and the words coming out of her mouth, to me, looked like she was asking, ‘help me; help me.'”

“I’m a 100% believer of it, “Wiley said. “I know what I saw. I didn’t drive that way for the longest time because I was afraid I was going to see her again.”

We first visited Findlay Cemetery back in 2005 with the hope of glimpsing the “ghost lady” but we just encountered idiots and the police. It was a nice summer night for an evening investigation. The moon was full and the cemetery was lit up. The place is small but well-taken care of. We wandered in and headed towards the back where it was wooded and more private. Small tombstones trickled into the woods making for an eerie little graveyard forest. It was also rumored to be a more “paranormally” active part of the cemetery so we set up some basic equipment – the usual audio and video recorders.

In the middle of the cemetery was an old, broken tombstone – its top half missing and the bottom held up by two wooden posts. At some point in time, it became known as the grave of the “Ada Witch.” People had left trinkets, coins, and candles by it so there was no doubt that we were looking at the right spot. Seeing there was no historical evidence backing the legend, there was no evidence that the grave actually belonged to the famed Ada Witch.

We knew we were in for an interesting and annoying night when a couple of lackluster “ghost hunters” showed up smelling like beer and stupidity. They introduced themselves and informed us they were part of a paranormal team (naturally.) We talked to them for a bit and then they wandered off into the cemetery somewhere.

We picked up our gear and proceeded to walk “calmly” to talk to the police. As we approached the gates, the cops stepped out of their cars and were already shining their flashlights at us. One of our gang coming from the back of the cemetery had started to jog to catch up with everyone. An overzealous cop thought she was fleeing the scene and yelled, “Freeze…stop running!”

“I’m just trying to catch up!” she yelled back, sounding irritated.

The cops had confused looks on their faces as we walked out of the cemetery and lined up. Our range of ages was the 20s–50s. The cops thought they were going to find a bunch of teenagers partying in the cemetery, not a gang of people dressed in dorky matching black t-shirts with our group logo on them.

“What are you guys doing here?” a cop asked, clearly confused.

“We’re ghost hunting,” we said like it was the most natural thing in the world to be doing.

The officer arched an eyebrow and asked for our IDs. While he was looking at them, we explained we were a paranormal team (Great Lakes Paranormal Research back then) and what we did during our investigations. I was waiting for the cops to smell the beer on the drunken couple’s breath, but he never said anything to them.

The next thing we knew, a voice came through the officer’s radio and asked if everything was okay.

That was the last thing I had expected to hear. I had to stop myself from laughing out loud. He gave us our IDs back and told us to let them know when we were going to be in the cemetery next time. They were happy they didn’t have to bust a bunch of kids and even told us to go back in and keep investigating because we’d probably scare the kids away for the night.

Yeah but what about these drunken idiots next to us…take them with you!

The whole episode was kind of humorous after it was over. The police even asked us if we had found anything paranormal yet. We stayed on for a little longer but the Ada Witch wasn’t going to show up for us that night.

A few days later, “dirt from the grave of the Ada Witch” was posted on eBay, sold by none other than the drunken ghost hunters. I wouldn’t have expected anything less from them. The dirt never sold.

Over the years, people have continued to visit Findlay Cemetery, hoping to experience something paranormal. Many have visited respectfully, but those who haven’t have hacked away at the supposed grave of the Ada Witch to the point that even its bottom half wasn’t left anymore. In 2013, Nicole Bray was doing research for her book, Ghosts of Grand Rapids, and learned that the destroyed grave had belonged to Sarah McMillan, who had died of Typhoid Fever in 1870 at the age of 29 – not by the hands of her enraged husband. Her grave had become entwined with the West Michigan legend and suffered for it. Bray got in touch with a few monument companies and one gladly donated a new stone. Will the new grave continue to be associated with the legend? Hopefully not, but no doubt people will continue to report seeing the ghostly apparition of the Ada Witch, whoever or wherever she may be.

How to Find the Ada Witch

While this apparition has been associated with the cemetery, more often it’s the nearby roadways she is seen on. People have claimed to see her wandering along Honey Creek Road, around the area of Honey Creek and Conservation NE near Seidman Park, and also along Egypt Valley Ave. If you do decide to go in search of her, please be respectful to the people who live in the area and to the cemetery. 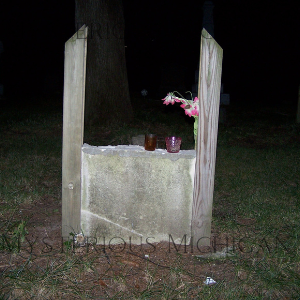 2005 photo of the now former tombstone that had been associated with the Ada Witch legend for decades.

Have you seen the Lady in White of Findlay Cemetery? Write or comment below.

Remember, visiting a cemetery after it’s closed is considered trespassing and can get you in trouble. Don’t get in trouble.

**All cemeteries should be entered with respect. Leave them as you found them. Don’t litter, don’t vandalize anything or so help me, 10,000 demons will strike you down. If the cemetery has hours posted, respect that and enjoy the cemetery during open hours. I am a firm believer that spirits don’t just come out at night. I think it’s just “ghost hunters” who only come out at night. Respect nearby private property and don’t trespass where you do not belong.