“I had an encounter with two shadow people that lived in my bedroom growing up in Robinson Township, Michigan.  This encounter ended with a photo of both of them together. I’ve been looking for answers to it for years and was wondering if you had room for my story and picture on your site. I’d love to spread the story and see if anyone else has answers.”

I received the above email to Michigan’s Otherside and was immediately intrigued. The Shadow People phenomenon has interested me ever since I saw something with my own eyes at the Felt Mansion in Saugatuck, Michigan. It’s a subject that scares people because reports of Shadow People are typically not positive. I wrote back to the man to learn more.

“When I was a teenager, I had problems with depression. One of the ways I coped with this was by connecting and talking with something I couldn’t see, but that I could sense, in the dark corner of my bedroom. Whenever I did this I would almost instantly feel calmer and less distraught and comforted. Finding something that helped, I figured it was just me being crazy and a placebo effect type thing, so I didn’t mind doing it almost every day.

Until one day, a few years later, my dad started losing his own mind thinking monsters were outside our house and his mental health started rapidly decreasing. Then, a few months later I connected that to the thing in my room after asking it “if it was the cause,” and with no audible response, (which FYI,  there was never a case where I saw or heard anything, just “felt” it), I got incredibly angry at whatever I was sensing in my room and “knew” it was at fault. Then I basically swore at it and told it to “go away” if it was going to hurt my family. I did this for about an hour until I couldn’t feel anything there. Then every time I felt it I would calmly tell it to f@#$ off and ignored it whenever I felt it around till I couldn’t feel it anymore.

A few weeks later my dad couldn’t sleep and felt something outside the house sometime past midnight. Being too afraid to look, he stuck a camera outside the door and took this picture of our driveway. After this day I didn’t sense it in my room again. There are two figures in front of my dad’s van. My dad’s also not tech savvy enough to make this and I tried checking to see if the photo was edited and it looks real, so I have no idea what this was. My parents understandably no longer live in Robinson township because of my father’s mental health. So I’ve not had this happen since, just unrelated events.” – James 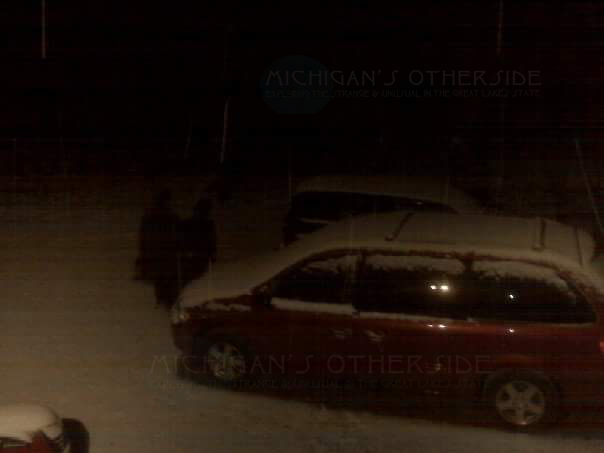 James believed the photo was taken with an old Samsung cell phone around 2009.
Photo and story used with express permission of the owner. 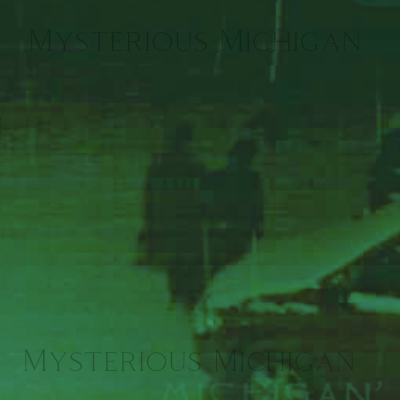 This portion of the photo was cropped and lightened.
Photo and story used with express permission of the owner.

For many years I’ve thwarted people’s attempts to show me their paranormal photos. More often than not they were just examples of bad photography or people seeing what they wanted to see. But when I looked at this photo, I immediately got the chills, especially given the story that went along with it.

So what were the shadowy figures standing outside in the snow? Were they the manifestations of the disembodied voices James had communicated with during difficult times? Were they Shadow People in the traditional sense?  Thoughtforms or tulpas that had been created and were now released? Or for the more skeptical type, just us humans seeing recognizable shapes in a photo and attaching a metaphysical meaning.

If you have an opinion or have had something similar happen, feel free to send an email or comment below.